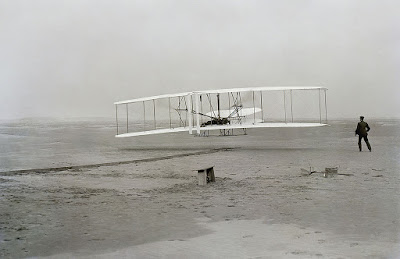 The Wright brothers invented and flew the first airplane in 1903, recognized as "the first sustained and controlled heavier-than-air powered flight". They built on the works of George Cayley dating from 1799, when he set forth the concept of the modern airplane (and later built and flew models and successful passenger-carrying gliders). Between 1867 and 1896, the German pioneer of human aviation Otto Lilienthal also studied heavier-than-air flight. Following its limited use in World War I, aircraft technology continued to develop. Airplanes had a presence in all the major battles of World War II. The first jet aircraft was the German Heinkel He 178 in 1939. The first jet airliner, the de Havilland Comet, was introduced in 1952. The Boeing 707, the first widely successful commercial jet, was in commercial service for more than 50 years, from 1958 to at least 2013..................visit page 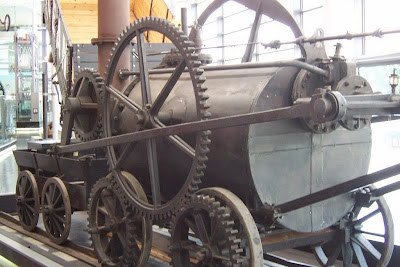 Including systems with man or horse power, and tracks or guides made of stone or wood, the history of rail transport dates to as early as Greek times.
Wagonways were relatively common in Europe (typically in mining) from about 1500 through 1800. Mechanised rail transport systems first appeared in England in the 1820s. These systems, which made use of the steam locomotive, were critical to the Industrial revolution and to the development of export economies across the world. They have remained the primary form of land transport ever since for most of the world.................Visit Page. 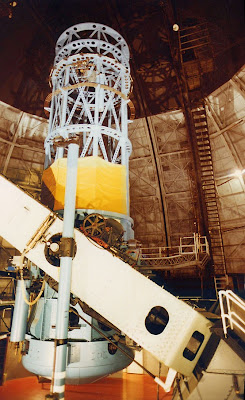 A telescope is an instrument that aids in the observation of remote objects by collecting electromagnetic radiation (such as visible light). The first known practical telescopes were invented in the Netherlands at the beginning of the 17th century, using glass lenses. They found use in terrestrial applications and astronomy.Within a few decades, the reflecting telescope was invented, which used mirrors. In the 20th century many new types of telescopes were invented, including radio telescopes in the 1930s and infrared telescopes in the 1960s. The word telescope now refers to a wide range of instruments detecting different regions of the electromagnetic spectrum, and in some cases other types of detectors....................Visit Page. 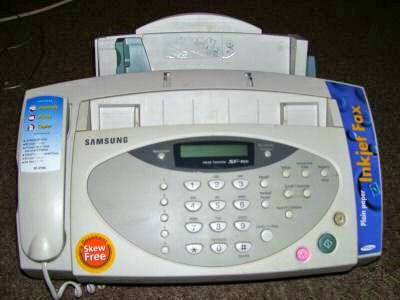 Fax (short for facsimile), sometimes called telecopying or telefax, is the telephonic transmission of scanned printed material (both text and images), normally to a telephone number connected to a printer or other output device. The original document is scanned with a fax machine (or a telecopier), which processes the contents (text or images) as a single fixed graphic image, converting it into a bitmap, and then transmitting it through the telephone system in the form of audio-frequency tones.The receiving fax machine interprets the tones and reconstructs the image, printing a paper copy. Early systems used direct conversions of image darkness to audio tone in a continuous or analog manner; since the 1980s most machines modulate the transmitted audio frequencies using a digital representation of the page which is compressed to quickly transmit areas which are all-white or all-black..........................Visit Page. 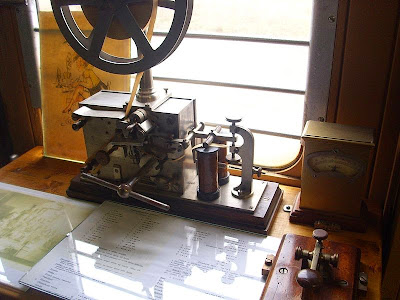 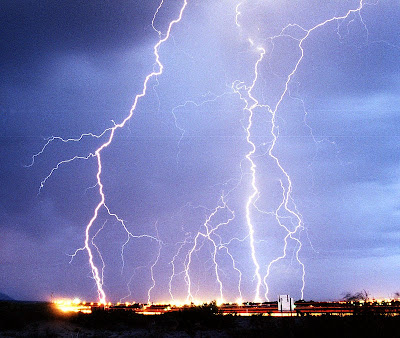 Electricity development and history are very interesting. However, humankind’s knowledge of magnetism and static electricity began more than 2,000 years before they were first recognized to be separate (though interrelated) phenomena. Once that intellectual threshold was crossed – in 1551 – scientists took more bold steps forward (and more than a few steps back) toward better understanding and harnessing these forces. The next 400 years would see a succession of discoveries that advanced our knowledge of magnetism, electricity and the interplay between them, leading to ever more powerful insights and revolutionary inventions...................Visit Page.

A telephone, or phone, is a telecommunications device that permits two or more users to conduct a conversation when they are not in the same vicinity of each other to be heard directly. A telephone converts sound, typically and most efficiently the human voice, into electronic signals suitable for transmission via cables or other transmission media over long distances, and replays such signals simultaneously in audible form to its user. The word telephone has been adapted into the vocabulary of many languages...........................Visit Page.